How I got into FileMaker

I was living in Vancouver, BC in 1993 working for a small bar code manufacturing company based in the US and was responsible for the P&L for Western Canada. We had a Macintosh Classic II with a handful of applications to run the business. The accounting software was fine but I was asked for reports that were impossible to get from the accounting app.

I literally looked around the computer for any application I could find that might help me do my work better and faster. I found it. 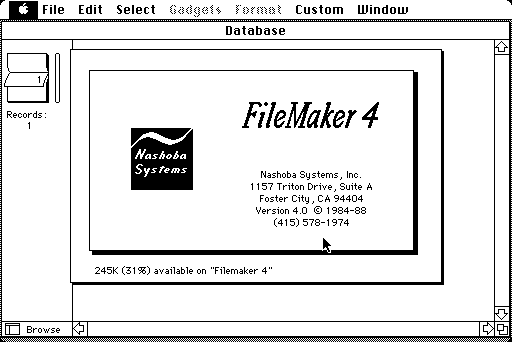 I never looked back.

I ended up creating a quote system used across Canada and US, reports for executives, and eventually imported data from manufacturing apps for high-level reporting across 8 offices in US, Canada, Mexico, Australia, and New Zealand. FileMaker was my secret weapon for collecting and providing information that helped me steadily gain more responsibility and move up in the company over my six years there.

I went to work for a GE in an IBM Lotus dev group. After 6 months, I thought, "I'll probably never use FileMaker again".

After 1 year, we identified a need for some information management and reporting that needed to happen quickly. In two weeks I build a system our entire practice used to calculate billable hours, among other things. Enter FileMaker. Again.

Started my own gig and jumped into web dev with both feet. 90% LAMP stack. Once again, "I'll probably never use FileMaker again".

My brother-in-law called me one day:

I had the bandwidth and I thought a change of scenery would be refreshing for 2 weeks. I said yes.

After 6 weeks, the .NET guys told their client "There's no way we can rebuild this in 9 months. Way to complicated. We're out".

They client asked me if I would stay on to fix and enhance their existing solution for 6 months. I did. I ended up going to work for them full-time 2 years later.

After a year of "chatting" about joining Marty Thomasson of Gearbox Solutions and helping him grow his business, I finally took the leap into working for a bona fide FileMaker shop. It was then I realized I would probably not say, "I'll probably never use FileMaker again" ever again.

By the spring of 2015 80% of my work was web-based. Either FileMaker or some other back-end was being used, but I spent most of my time writing HTML, CSS, JavaScript, and PHP. I was happy. The more time I spent away from FileMaker the better. I just couldn't handle the antiquated tools and UI provided to do my work, not to mention performance between FileMaker Server and MySQL or PostreSQL.

FileMaker 14 introduced the redesigned and reengineered scripting and calculation environment. After a few days, I rediscovered the joy of FileMaker.

I now spend 70% FileMaker dev and 30% web (PHP, Vue, etc.). I've watched FileMaker come into its own gradually over the decades and bring modern tools and technologies to us. The No. 1 reason I will often gravitate toward FileMaker as a development tool is speed. It is quite literally Rapid Application Development.

I'm in it for the rest of my working life and am grateful to be in such an incredible community, even though iI didn't attend my first DevCon until 2011. I love teaching others almost more than the countless hours spent developing and perfecting workflow for our clients.

Evolution of a FileMaker Layout

Evolution of changes to a FileMaker Layout beginning with FileMaker v4.

A little collaboration is always a good thing (and it's nice to work with smart people)...